The Loneliness of Having Triplets

Good morning!  As my triplets are turning three (next Wednesday) and I "published" my book, I have been replaying the last few years of my life in my head.  One main conclusion theme that keeps coming up is that I'm happy that I'm basically a loner.  Otherwise, having triplets would be seriously lonely.

Most triplet mother that I have met or "friended" online were on bed rest for awhile.  Like me, they might have had the occasional friend stop by, but they really spent a majority of time alone.  Thanks to message boards and Facebook, it didn't seem like we were always alone, but we were.  So on most days, I talked to no one, but my husband.  Brian is wonderful and all, but he's not exactly a replacement for the women friends that I used to hang out with when it was just Gavin and me. 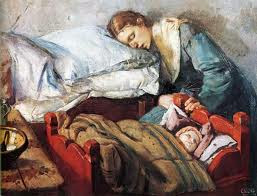 For the first six months of the triplets' lives, I'll be honest, I was just trying to survive.  Breakfast entailed making coffee for Brian before he left for work, oatmeal for Gavin and bottles for the triplets.  I usually had a Diet Coke, a handful of dark chocolate with almonds and maybe a Luna bar.  Dinner was more involved as I had to make a balanced dinner for Gavin, bottles for the triplets and then another dinner for Brian and me.  It only got more complicated when the triplets started eating food.  I didn't have time to talk on the phone...that's not exactly true.  I did when the kids were napping.  Gavin still napped in the afternoon, so I usually had from 1pm-4pm all to myself, as long as you don't include, doing laundry, straightening up the house and collapsing in front of the TV for a couple hours to recharge.  I don't watch a lot of TV, but I needed it back then.  It allowed me to stop thinking about what I needed to do, what I forgot to do and what I really wanted to do and enter into another world.

We had only been in our new house for four months when the triplets turned one.  We invited over one hundred people to the triplets' first birthday party.  Honestly, though, most were family.  I invited our immediate neighbors (7 houses) and anyone else that I knew had small children.  It's been two years since that party and not one family has invited us over.

When Gavin started preschool that fall, the triplets were sixteen months.  I vowed that I was going to find a nice set of friends like we had in New York City.  His preschool teacher handed out a sheet with the name, email and phone number of the other children in his class.  With the weather still warm and our backyard in decent shape, I promptly emailed the class and invited them all over for a play date.  Out of the few responses I got, only one accepted the invite.  However, he couldn't come in the morning as I had invited.  So against my better judgement, I had the play date in the afternoon when the triplets were napping.  BIG MISTAKE!  The two three-year boys made more noise than a high school marching band.  Not only did the triplets not nap, but they basically cried and whined their way through the rest of the day.

Two more times that fall I invited the entire class over for a play date.  On one more occasion another mom accepted the invite and brought her two boys over.  It was a lovely date.  The boys were wonderful with the triplets and the mom and I got along well, I thought.  However, I never heard from her again.  Gavin was NEVER invited over for a play date.  I stopped asking.  I resigned myself that it was just going to be me and the kids for the rest of the year.

We had a nice year.  I made a good friend, Lisa.  She works at Starbucks..the one in Target.  The kids and I made a weekly trip to Target.  Lisa gets a kick out of how big they are now, because when I first went to Target, I had the big triple stroller and Gavin would be in an Ergo on my back.  I also made another friend, V.  I met her at Target too!  Her kids go to the same preschool as Gavin, but are in different classes.

This past year has been rather productive.  Gavin doesn't nap and most of the time the triplets don't either, so I had to give up my two hour TV break in the afternoon, which has been hard.  Gavin has traded play dates with one boy in the neighborhood, but we don't come close to having the friends like we did in New York City.  I've tried to set up play dates for Anna, but they've never come to fruition.

I don't know what happened when September hit, but I just felt the need and rush to put the story of my family's birth down on paper.  No one died or became ill.  The desire to get my story down for my kids to have became a must.  I wrote the first draft in three weeks and cried the entire time I wrote.  Then it took seven months to make sense of the gibberish I wrote down.

I am hoping that this fall when Gavin is in kindergarten full-time and the triplets are in preschool 3 days a week that I'll be too busy hanging out with other mother friends to write a blog or a book, but it's ok if I'm not.  The loner in me enjoys thinking that in my solitude I am connecting with other women.

All the best,
Laura

Five Strands of Hope: Chapter 1
Posted by Laura at 8:25 AM