Can iPod Replace Drugs in the NICU?

As a mother of preemies, I found this article very interesting.  Music is known to have healing powers.  I use music as an antidepressant, a therapist and to elevate an already joyous mood.  This might make you laugh, but when I was having a rough time in high school, I found Wilson Philips' song, "Hold On...for one more day," to be encouraging.  I wasn't naive enough to believe that they were actually singing to me, but the song made me feel like I wasn't alone.  So it sounds plausible that music can replace some drugs in a NICU. 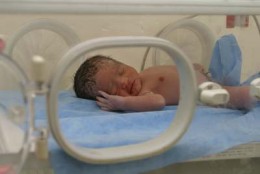 
"Usually if they're fussy their heart rate goes up, their saturations can fall down and when you play the music it calms them,” Bruton said. “Their heart rate comes back to a normal resting heart rate and their saturations come back up."
Fifty premature babies will take part in the study.  Bruton said the music reaches only 45 decibels and mimics the mothers heartbeat.  There have been other studies, which have suggested that music therapy actually shortens the time spent in neonatal intensive care units.


Here is the link to the full article.

My Book at Amazon: Five Strands of Hope

I'll Have Another
A Mother's Fears
The Strongest Women
The Loneliness of Having Triplets
What is the "Right" Number of Children to Have?
The Baby Making Project: IVF