No more octomoms?  It sounds good.  It sounds easy, but is it?  Octomom is a specific case of a doctor transferring way too many embryos.  But what about the triplets, quadruplets and such that are a result of ovary stimulation, i.e. clomid?  I don't think there is any easy answer for these multiples.


Thankfully, new advances in IVF technology are reducing the risk of multiple births and health defects to hopeful families.  IVF success rates used to be based on a numbers game where chances of pregnancy increased with each embryo implanted.  This is definitely what I believed.  However, now doctors claim that they can identify the healthiest embryo using genetic testing.  Then the fertilized egg stays in the lab for five to eight days until it reaches the blastocyst stage, which increases its chances of survival.  With a greater probability of achieving pregnancy, more woman are choosing to transfer just one embryo.

I'd like to note, though, that my husband and I were going to do PGD, genetic testing on our embryos.  However, out of seventeen eggs that were retrieved from my ovaries, only four fertilized.  The doctor said the risk of PGD destroying our embryos was too great, because two were great and two were duds.  The same doctor also told us that we only had a 2% chance of having triplets, if we put all four embryos back.  If we only put two back, as originally planned, then the other two embryos would be thrown away.  They were unworthy of freezing.


We thought we were making a sound decision and with three year old triplets playing as I type, we did make the right decision.  However, I believe, that IVF is as much an art as a science, but hopefully with new procedures the scales are tipping farther on the science side. 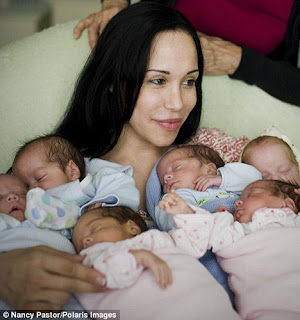 Here is the full article.

A Mother's Fears
The Strongest Women
The Loneliness of Having Triplets
Premature Babies Twice as Likely to Suffer Mental Disorders
Are You Having Twins?
Does IVF Increased Your Breast Cancer Risk?
Time to See a Fertility Specialist
What is the "Right" Number of Children to Have?